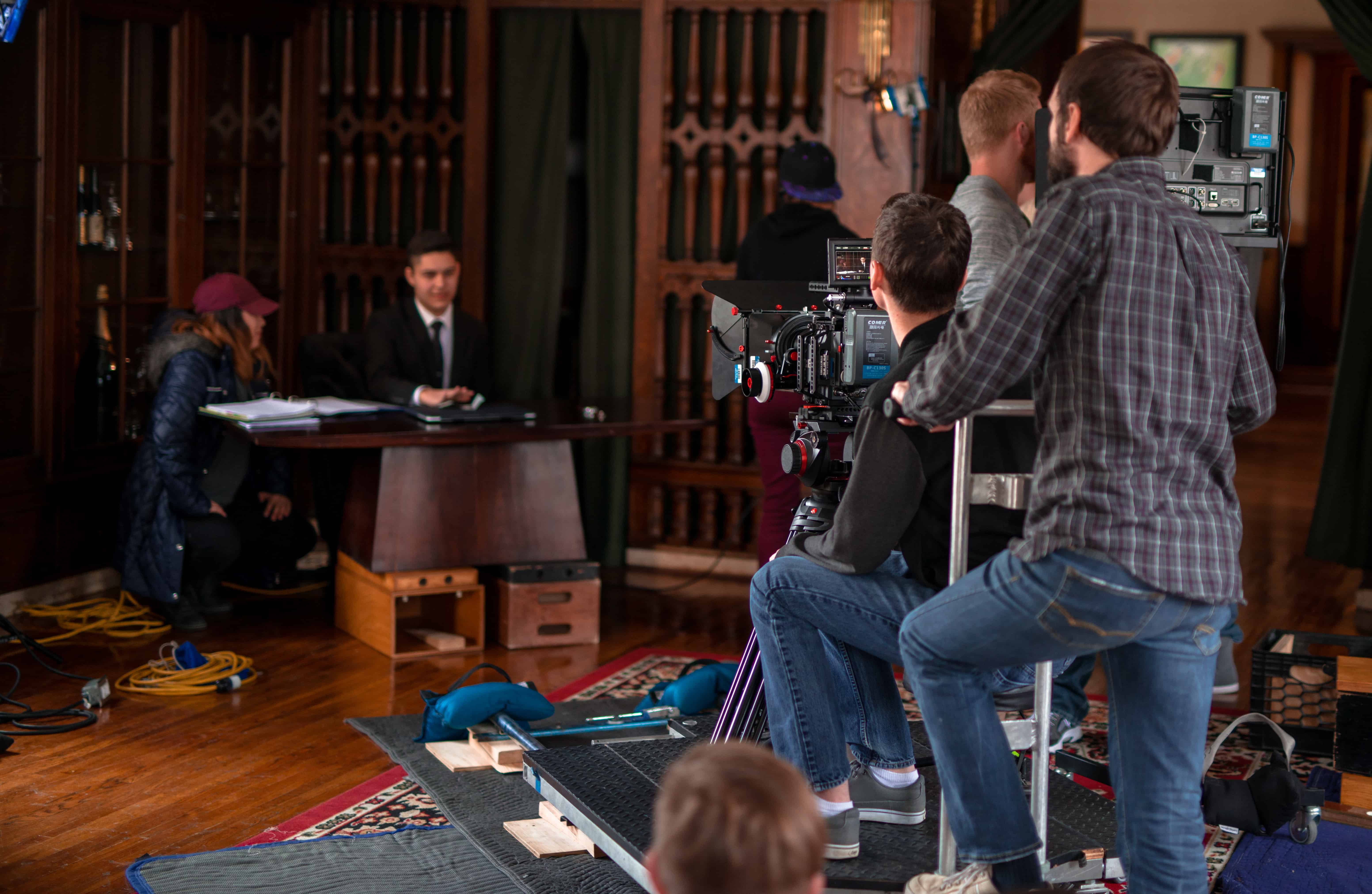 Open auditions will be held May 22 and 23 from 4 p.m. to 8 p.m. at Compass College of Cinematic Arts located at 41 Sheldon Blvd. SE, Grand Rapids, MI 49503.  Auditions will consist of a cold reading. Actors should supply a headshot, and acting resume if possible. Talent must be available for production varying times throughout the month of June, see individual casting calls for more details.

SYNOPSIS: Woody, Michael, Flora, and Daniella are crew members of a failing educational lumber show, which is about to be canceled. With no alternative, they make the trek to a foreign land (Indiana) in search of a magical wood sculpture. Unbeknownst to our foolish heroes, there’s also a zombie invasion (festival) taking place on the way there. When two gas station attendants, Mason and Mabel, decide to terrorize them dressed as zombies, they’re forced to fight back. Unfortunately, our heroes are too stupid to realize they’re faking, and actually believe they are about to be infected as zombies. Will they film the next episode about wood? Will they switch to zombie hunting? Will they even snap out of their false zombification?

Michael Mannfred [ Male] [Age: 20s]  Producer of American Wood, he’s the son of the executive producer and has a Napoleon complex. He’s been trying to maintain a grip on the group and force them to take the show in a direction that will make more money.

Daniella Kroyd [Female] [Age: 20s]  Sound technician of American Wood, she’s obsessed with everything supernatural and paranormal. She’s only concerned with the extraordinary because she is not.

Flora Jenkins [Female] [Age: 20s]  Originally a Production Assistant, now turned-cinematographer after an accident she caused, she’s mainly at this job to put herself through med school.

Please include any resumes or head shots if available. Serious applicants only.

SYNOPSIS: Marie, Aaron and Matteo are a group of kids out trying to have fun. After Aaron and Matteo convince Marie to steal her father's prized baseball for a game of catch, Marie throws the ball through the window of her next-door neighbors, The Demille’s. When they go to retrieve the ball, they find Mr. Demille on the floor, dead. The group believes they have murdered Mr. Demille and decide to hide the murder and dump the body in the river. After a journey through their town, facing many obstacles along their way, they make it to the river and are stopped by a cop (Marie’s father) before they dump the body. He explains what really happened to Mr. Demille and that the kids didn’t actually murder him.

NOTE: If the character is a minor, the crew would like to have a bonding day with the kids and their parents. More information will be given at the auditions.

MARIE [Female] [AGE: 10-16] A strong willed young girl who wants to fit in with her friends. She isn’t a team player and believes she has the best ideas out of everyone.

AARON [Male] [AGE: 10-16] An anxious young boy who is skeptical of every move the group is making.

MATTEO [Male] [AGE: 10-16] A calm, lover boy type who hasn't quite accepted the fact that he’s not mature enough to be with anyone. The comedic relief of the group.

DAD [Male] [AGE: 30-50] A stern cop type. Single parent to Marie. A strict yet loving father who only wants the best for his girl.

DEMILLE [Male] [AGE: 55-80] A dead guy… potentially someone we could make look older than they are.

MRS. DEMILLE [Female] [Age: 55-80] The wife of the dead guy, again, potentially someone we could make look older than they are.

BOONE [Male] [AGE: 20+] A simple man whose dog becomes an obstacle in the kid’s journey.

If you would like to audition, please contact the producer Whitney Hemmes (whitney.hemmes@compass.edu) for sides for any role.

Please include any resumes or head shots if available. Serious applicants only.

Important Info: Auditions will be held at Compass College of Cinematic Arts, 41 Sheldon Blvd SE, Grand Rapids, MI 49503. They will take place on Tuesday, May 22 & Wednesday, May 23. If you are interested in auditioning please email the producer, Korbin Benker, at korbin.benker@compass.edu to get the details. This will be a cold read with sides provided at the door for the character(s) of your choice.

Compensation: Main cast are all paid roles, supporting cast is unpaid. Everyone on the cast will be fed on set and will receive a screen credit and a copy of the film.

Synopsis: Ike, an aspiring DJ, discovers his big break is a sham when the venue producing his shows turns out to be a money laundering scheme for the local mob.

IKE [Male] [Age: 18-25] Ike is a young college dropout turned aspiring DJ. He is overly confident, charming, impulsive, and waltzes through life to the rhythm of his funky electronic music.

MARCUS [Male] [Age: 35-60] On the surface Marcus is the owner of a club called Monarch, but he really is a high ranking member of an organized crime syndicate running an elaborate money laundering scheme. Marcus is cool and collected, with a deceitfully flattering disposition.

ANTON [Male] [Age: 20-40] Anton is Marcus’ muscle and right-hand man. He is a man of few words and the words he does utter are rarely kind. Anton is big and scary enough to handle any trouble that comes the Monarch’s way.

HALEY [Female] [Age: 18-25] Haley runs the ticket booth/admissions at the Monarch while she studies at college. She is good-humored and kind, but ultimately a realist.

GRANT [Male] [Age: 20-35] Grant is Ike’s older brother and serves as a parental figure now that their parents are out of the picture. He is a diligent and pragmatic police officer who wants Ike to give up on his “music carer” and pursue education more seriously.

RUDE ATTENDEES [Age: 18-25] A group of three or four young concert-goers who have no problem trashing the headliner once they get their refunds.

PAWN SHOP OWNER [Age: 30-60] Stoic Business owner who haggles with Ike over a mixing board.

WAITRESS [Age:20-40] She’s a waitress at a diner-style coffee shop.

SHADY GUY [Age: 20-50] A runner for the mob who dresses sharply, and delivers the dirty money to the Monarch.

CONCERT ATTENDEES [Age: 18-50] People who attend the Monarch’s grand opening only to be disappointed by the lackluster show. (As many as possible)

Important Info: Auditions will be held at Compass College of Cinematic Arts. If you are interested in auditioning please email the producer John Freedman at john.freedman@compass.edu to get the details This will be a cold read with sides provided.

All cast members will be fed on set and will receive a screen credit. Cast will also receive a copy of the film.

Quantum is a sci-fi thriller. Delilah Solomon is left to deal with the possibility of inheriting her father’s company after his death. The company, Eden Intelligence, is a leader in the fight to cure cancer and her father, John Solomon, has dedicated his life to this quest. Facing manipulation by a

power-hungry executive, she turns to the one thing that will help her understand her role in this … an android.

Delilah Soloman [Lead] [Female 20-30] She is independent, sassy and outspoken. She has a weak spot for her father and Eden Intelligence, even if she won't admit it. She’s a med student.

Marcus Francis:[Male 25-40] He is arrogant, power-hungry and spoiled, and believes he is the best thing that could happen to Eden Intelligence.

Android: [Male 20-30] It is strong headed and intelligent. It will stop at nothing to fulfill its purpose to cure cancer. The android is a celebrity with the public and it holds many secrets about Eden Intelligence.

John Solomon (Voice): [Male] [40-60] He is Delilah’s father and CEO and Founder of Eden Intelligence. He developed the first quantum artificial intelligence. He is full of regret for how he lived his life.

David Smith: [Male] [25-35] David is nerdy and funny. He goes to medical school with Delilah and has a small crush on her, too. He’s an intern at the hospital.

Secretary: [Female] [20-40] Quiet, intelligent and trustworthy. She is Marcus’ secretary and occasionally the android’s if it needs anything.

Protesters: Any age, as many as possible. Protesting for or against the Android’s human rights.

Wounded former Marine Greg Mason lives in isolation with only the passing truckers to keep him company on his old CB radio. One night he receives a desperate call from a terrified woman named Heather who is lost in the woods being and pursued by a ruthless killer. Greg must use his training to guide her to safety.

GREG [Male] [Age 30-50] Once a young, eager marine. Now a depressed, isolated, handicapped veteran. Greg struggles to accept his own value and identity outside of the military, feeling he lacks purpose.

Men and women with military experience will be given special consideration.